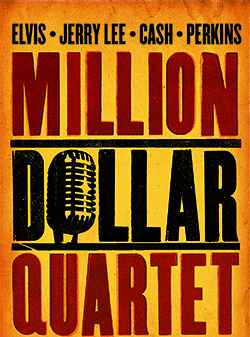 The musical captures the memorable day when four Rock n'' Roll greats made music history. On December 4, 1956, an auspicious twist of fate brought together Johnny Cash, Jerry Lee Lewis, Carl Perkins, and Elvis Presley at Sun Records'' storefront studio in Memphis, TN. The man who made it happen was the "Father of Rock''n''Roll," Sam Phillips, who discovered them all. This was the only occasion the four legends-to-be played together, and it has come to be known as one of the greatest rock jam sessions of all time.

RUN LENGTH OF SHOW IS 1:45 WITH NO INTERMISSION.